Try this new Volcano eruption tours in La Palma. The most popular activity now in the Canary Islands. Are you a Lava Chaser?... don´t miss it !

YOU PROBABLY ALREADY KNOW THAT CUMBRE VIEJA VOLCANO STOP ON THE 15,12,21 THAT IS WHY IF YOU ARE INTERESTED STILL ON DOING THIS TOUR, YOU WILL HAVE TO JOIN THIS NEW TOUR. CLICK HERE.

The eruption in La Palma witch started on Sunday 19th, is offering this amazing and unique spectacle that you can not miss. Our tour to see the volcano eruption is simple, easy and for everybody. We will visit the volcano from a safe distance, far enough to enjoy how the lava spewed high in to the air.

Lava from a volcano flows and a new river of lava has belched out from the La Palma volcano, spreading on the Atlantic Ocean.

This tour will start either in Santa Cruz de La Palma or Los Cancajos at 16.30h and from there we will go to visit the volcano, first in El Paso, from diferent and secure places, to the go up to Mirador del Time from where we can see the lava flow from the start until the end by the ocean.
This is also a good place to see where the lave is flowing in the Aridane Valley because we will be there as the sun goes down.

After this stop we drive back to El Paso and from the Church of Tajuya Viewpoint we will be able to enjoy for several hours this amazing volcanic eruption in La Palma.

The intensity of the eruption increased. Since the last update, the at least 4 active vents have been generating violent pulses of lava fountains with ash columns rising to approx. 3 km, as well feeding both surface lava flows directly from the vents as well as fueling the hidden-from-view lava tubes that transport most of the lava to active areas of the flow field downslope.
Volcanic tremor has increased significantly during the latest hours, likely heralding that a strong pulse of magma is reaching the vents. The southeastern vent that had been reactivated or opened a week ago, and so far only showed explosive activity, now also started to erupt more lava, in form of pulsating lava fountains. This vent now feeds a new lava flow travels towards the southern slopes and has already reached the San Nicolas district in Las Manchas.

There is no immediate end in sight to the volcanic eruption that has caused chaos on the Spanish isle of La Palma since it began about a month ago, the president of the Canary Islands said on Sunday.

There were 42 seismic tremors on the island on Sunday, the largest of which measured 4.3, according to the Spanish National Geographical Institute.

The volcano on the Spanish island of La Palma is at its most active since erupting, officials have said.

The cone of the Cumbre Vieja volcano had partially collapsed on Monday, sending new lava flows towards previously unaffected areas.

The Canary Islands Volcanology Institute  stated that “a giant lava fountain” of molten rock has gushed out of the volcano.

The rivers of lava rolling down the hillside now days are up to almost 3 kilometres wide.

“We are at the moment of greatest activity,”

The activity has been lower on most fronts today. Most notably, volcanic tremor dropped sharply at around noon local time to about half its values of the previous days average.
Whether this correlates to reduced lava effusion is difficult to say with certainly but at least likely. Lava continues to be seen arriving at the lower vent of the cone, now approx. 200 m tall, and from there mostly flowing into the tube system, but maybe it has been less in volume during the past day. In agreement with this interpretation is that the lava flows that advanced yesterday along the southern margins of the flow field also slowed down a lot and made almost no progress today.
The area of Las Norias, which has been the most threatened to become the next victim of lava flows reaching part of the Camino Aniceto road yesterday, still remains intact for now and can thus still hope to survive.
Ash emissions from the main crater remained intense, however, and produced a plume that rose to 3-4 km this morning. Different wind regimes brought much needed relief to the Ariadne valley, allowing sunshine to reach the ash-plagued area. But when one side of the island is free from the ash, the other usually suffers… The westerly winds pushed the ash cloud to the east and northeast, with the result that the airport located on the eastern coast had to close today.

A magniturde 5 hit 36 km below the island this morning at 3.37 a.m. and was felt by thousands of people.
On the other hand, shallower quakes have become less in numbers and magnitude with “only” 75 quakes in total during the latest 24 hours.
The eruption continues but has been decreasing in visual and instrumental intensity: at the vent, explosions and ash emissions have become smaller and rarer, while lava effusion continues. Most of the time, only a dense steam plume is rising from the main crater.
Volcanic tremor is similar as yesterday and on a (very) gradually decreasing trajectory. The same is true for ground deformation and reported values of gas emissions.
The new lava sea entry at Los Guirres seems no longer or much less active than yesterday this morning, judging from the webcam views, but this needs confirmation. Here’s an impressive video from yesterday’s activity.

For residents of the Spanish island of La Palma, Monday brought little hope that the volcano in Cumbre Vieja natural park will go quiet any time soon.

The volcanic eruption entered its 72nd day with no signs of letting up. In fact, experts now believe it has a good chance of becoming the longest eruption in 500 years.

“Unfortunately, the forecast contemplates no short-term end,” said Francisco Prieto, a technician for the team of experts monitoring the eruption, the Volcano Risk Prevention Plan of the Canary Islands (Pevolca). Prieto said that could potentially last longer than the one that took place in 1646, when the Tehuya volcano spewed lava and ash for 84 days.

Experts also warned that new vents have opened up in recent hours and that new lava channels are flowing down in a northeast direction, affecting areas of the island that had so far been spared.

Now, 375 years later, another as-yet-unnamed volcano on La Palma has been drawing widespread attention. The eruption in La Palma new Volcano is into its 67th day, officially making it longer than the Fuencaliente eruption. It is necessary to go back further in time to find an eruption that lasted even longer: to 1646, when the volcano known as Martín or Tigalate spewed lava for 82 days.

One of the most widely accepted theories of the creation of the Canary Islands holds that the archipelago sits over the African Plate, which moves over the Earth’s mantle at a speed comparable to the growth of fingernails, and that around 20 million years ago this plate began drifting over a “hotspot” that injected magma and led to the creation of the first and oldest islands: Fuerteventura and Lanzarote. La Palma and El Hierro are the youngest, at 1.8 million and 1.2 million years of age, respectively. 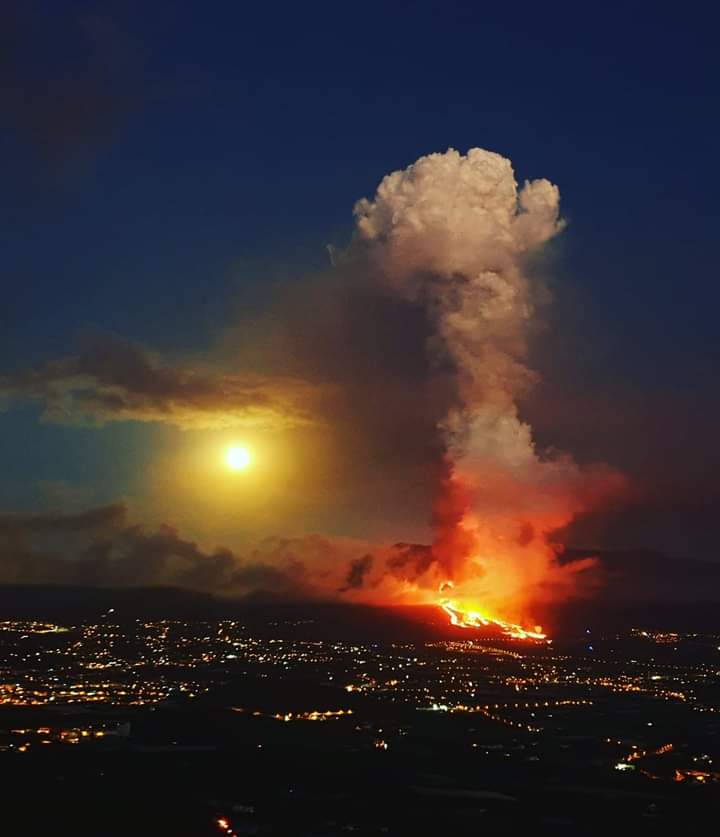 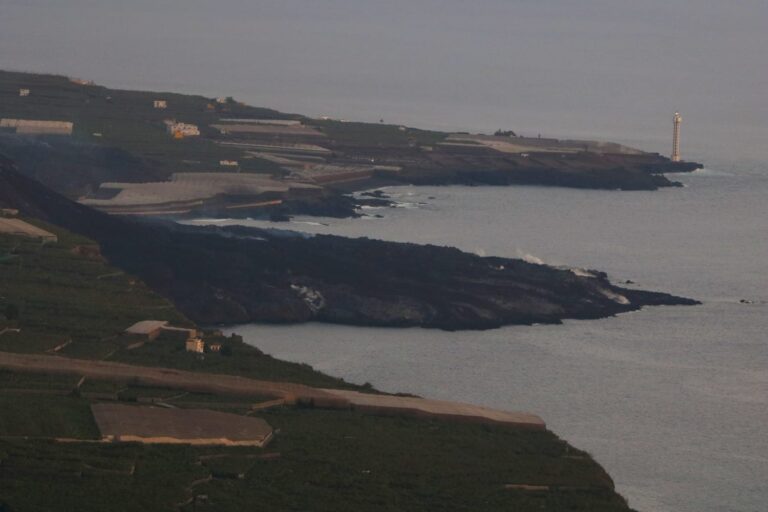 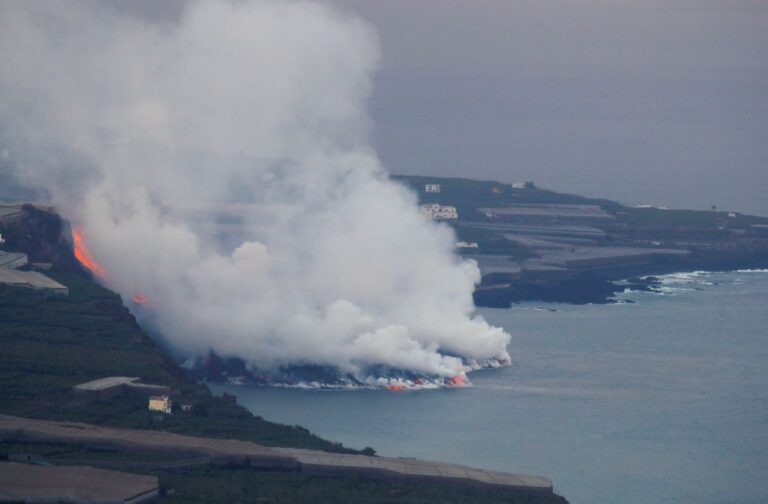 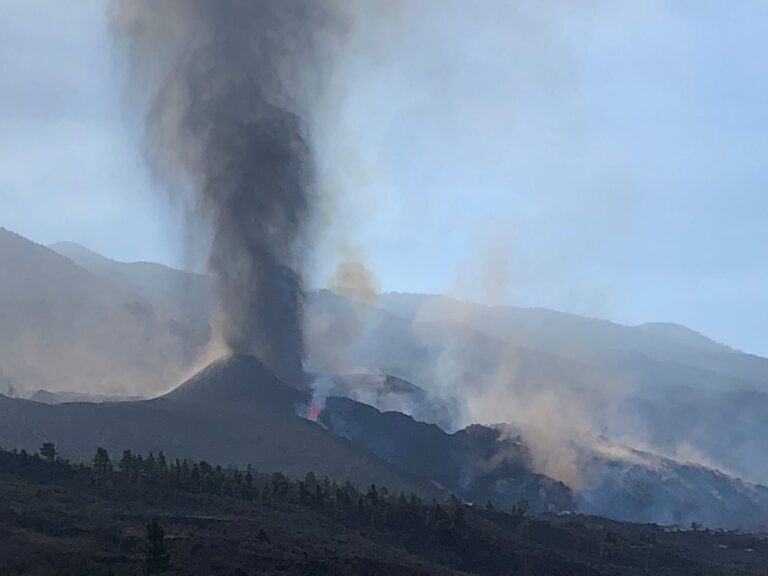 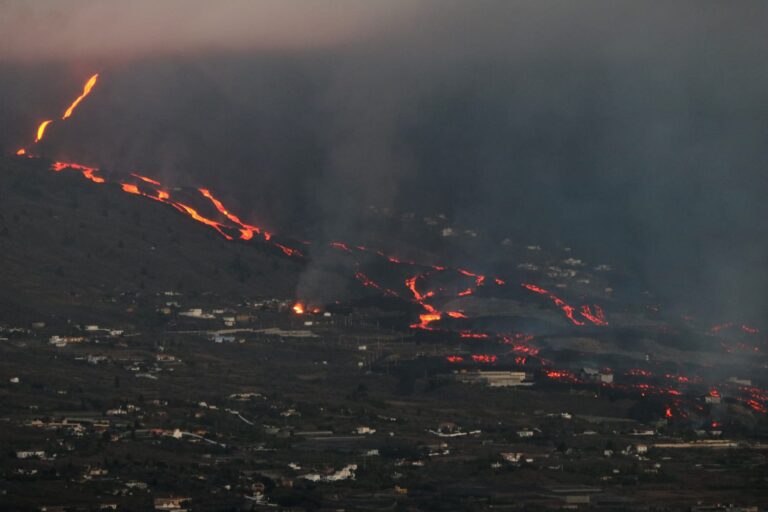 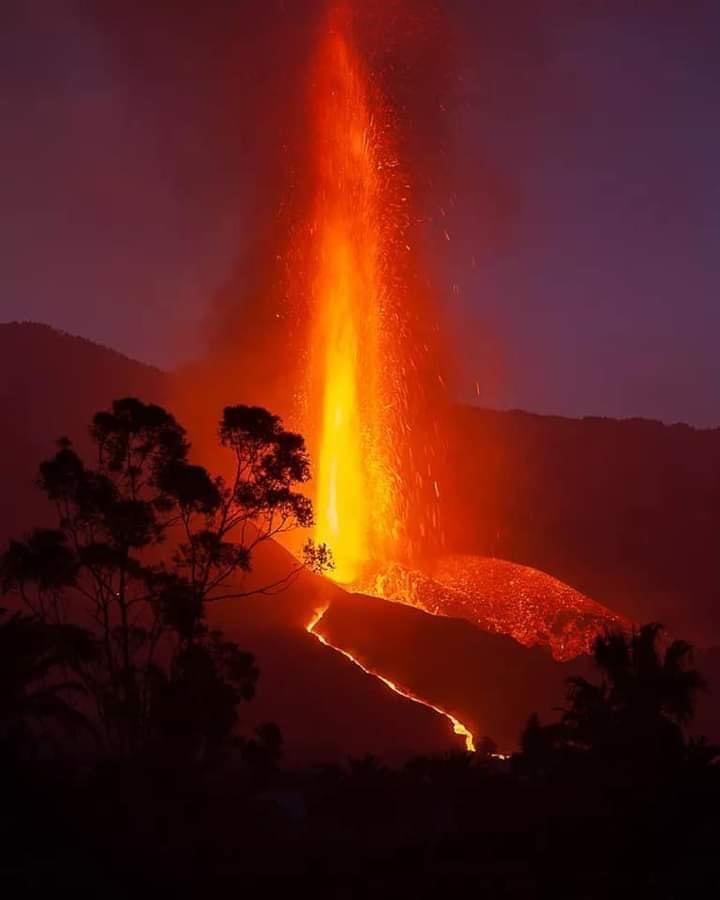 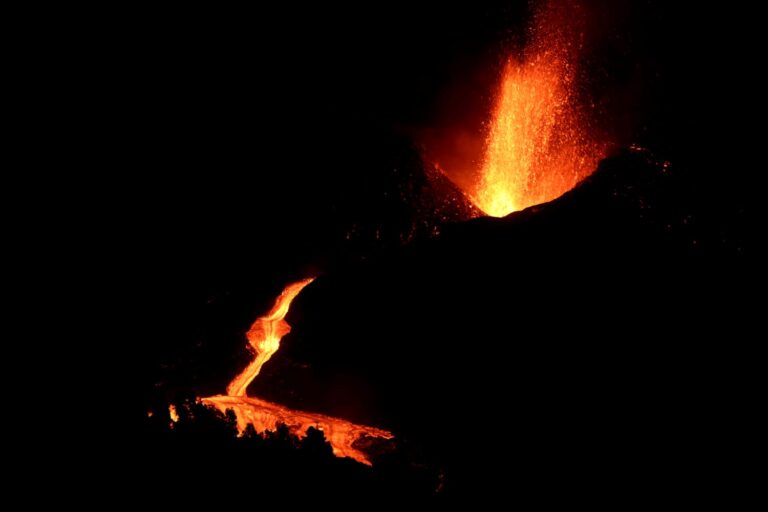 good view of the main crater from the new volcano 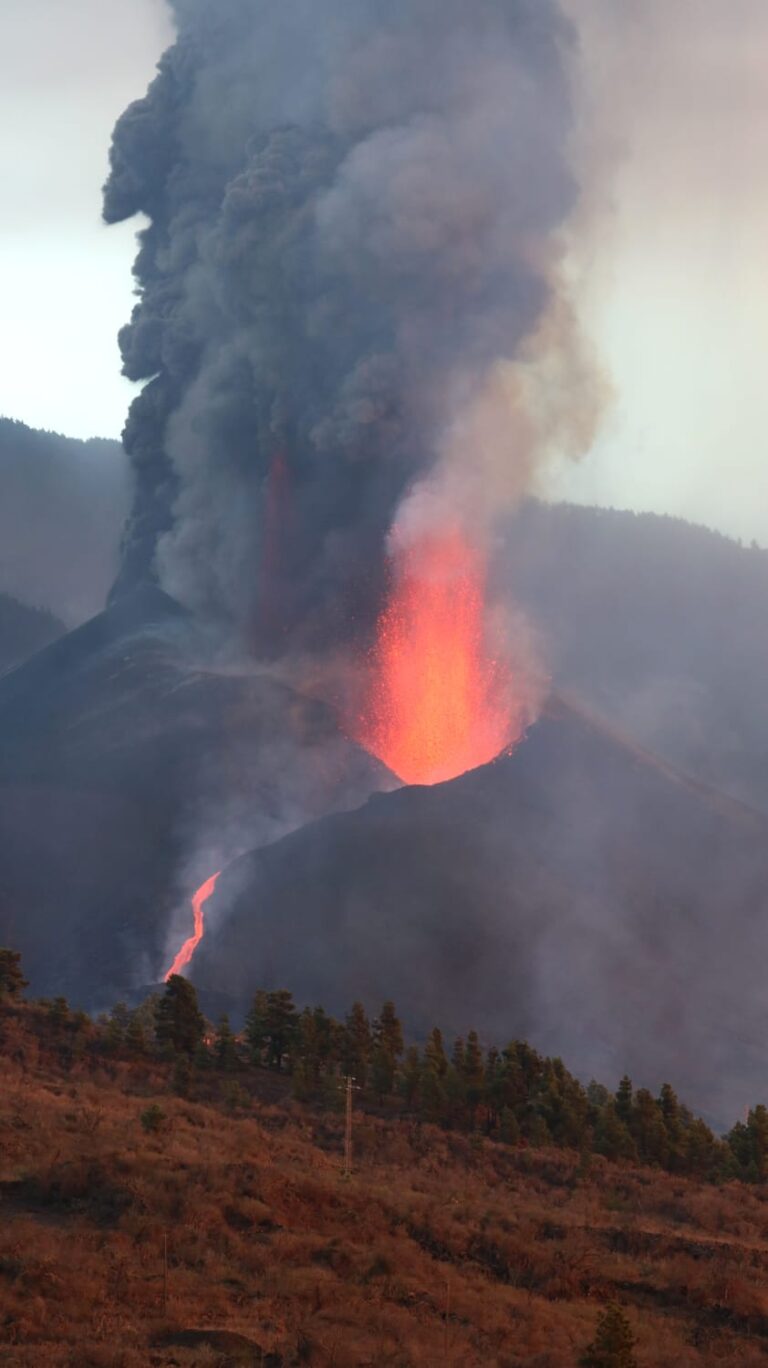 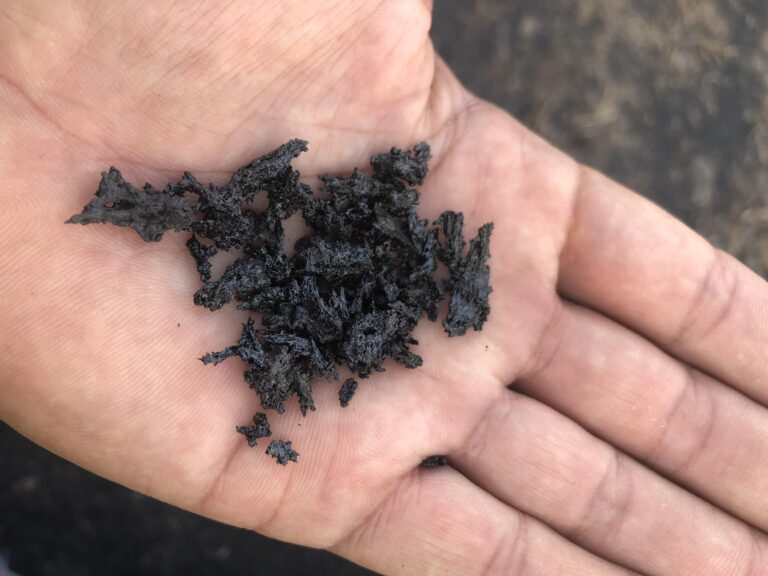 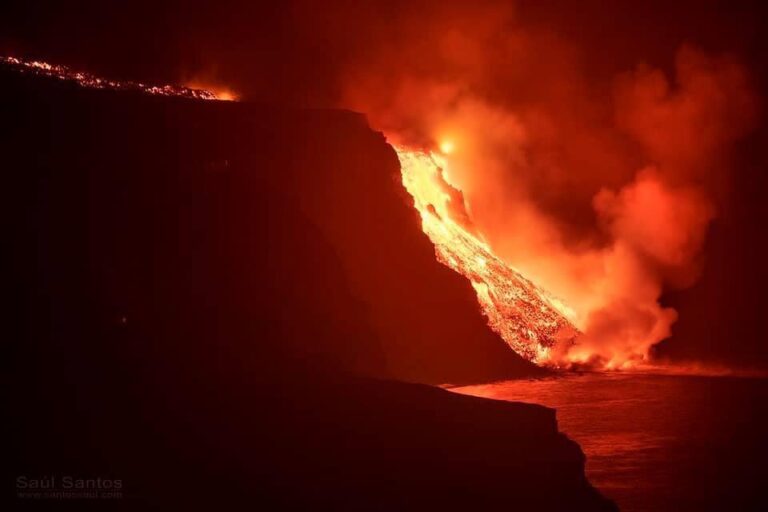 the lava is arriving the sea 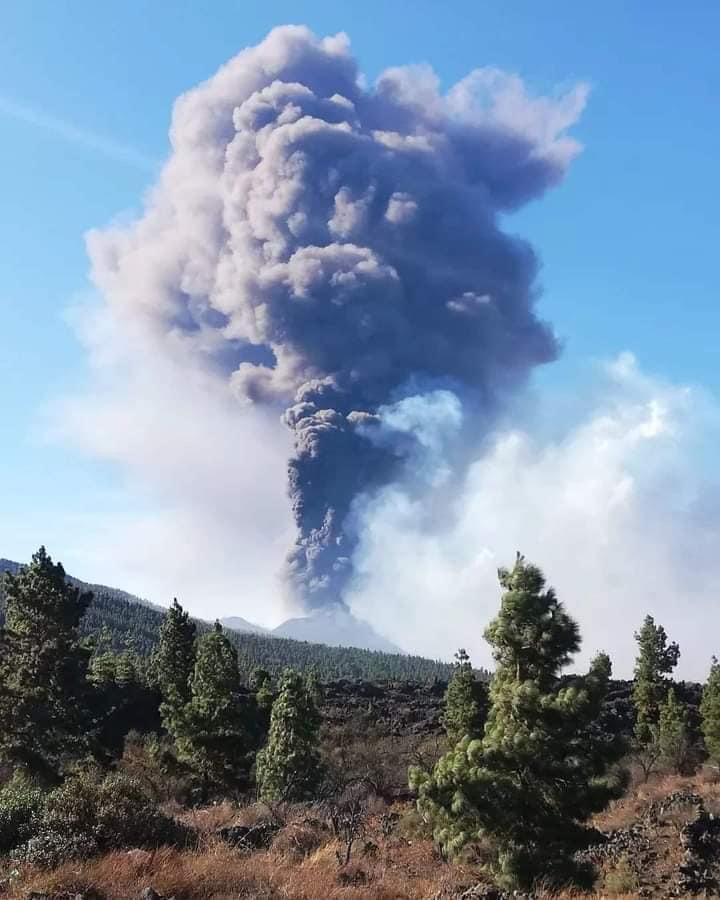 Our recomendation for you is to bring for any tour good hiking or sport clothes and shoes with a good profile. It´s also a good idea to brring a cup. Good jacket.

A liitle bit of water is also a good idea. 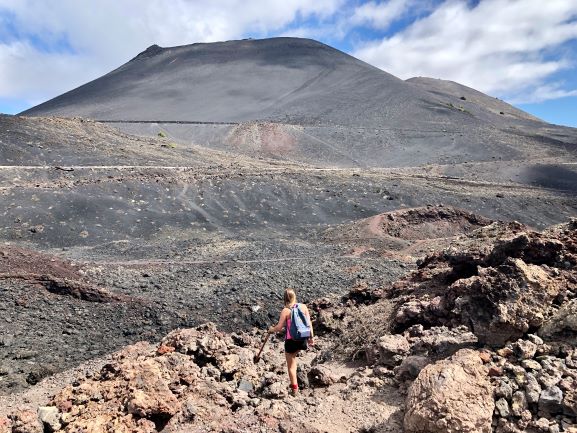 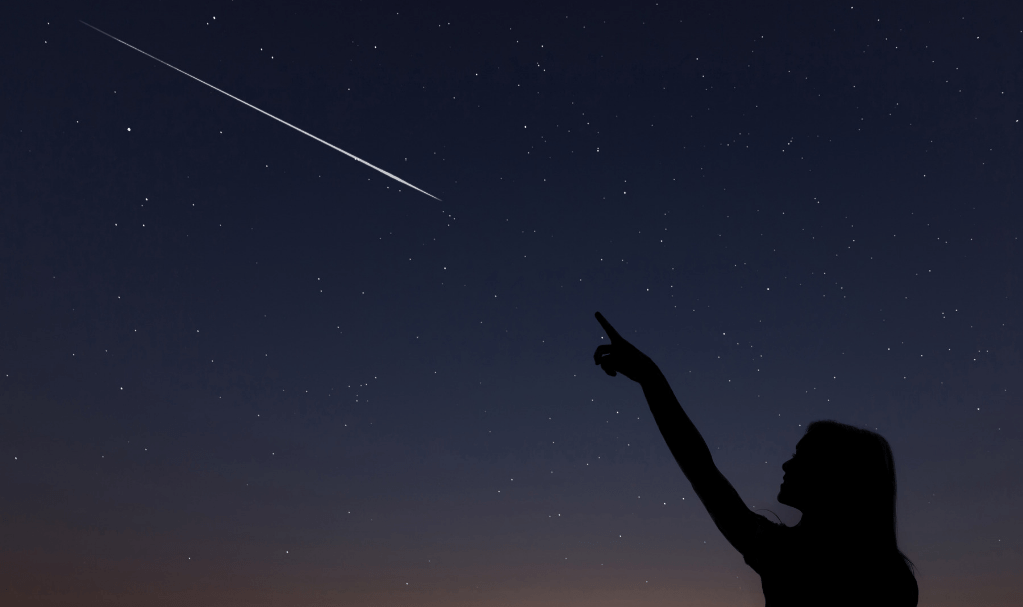